On 1 March 2018 Heike Mahmoud will assume the leadership position at the CCH – Congress Center Hamburg. As the new CCH Chief Operating Officer, the 53 year-old MBA will be a Member of the Executive Board of Hamburg Messe und Congress GmbH (HMC). Heike Mahmoud has been active in the national and global convention and event business for more than 25 years. She started her career in 1993 with a Professional Conference Organiser (PCO) firm. In 1998 she became Head of Sales and Marketing at Europe’s biggest hotel and convention centre complex, and after joining visitBerlin as VP and Conventions Director in 2001, she successfully developed the Berlin Convention Office (BCO), which she then headed until accepting her new role at HMC. With her broad experience and her dense network of international connections, Heike Mahmoud is one of the top executives in the global events business. She is taking over from Edgar Hirt who retired at the end of 2017. In Hamburg Heike Mahmoud and her team will initially focus on driving the marketing efforts for the CCH which is currently undergoing comprehensive modernisation. When the CCH reopens, it will be among Europe’s most advanced convention centres.

“In the convention business we think and plan in longer cycles. That is why it was so important for us to fill this position in a timely manner. We count ourselves lucky to have recruited such an experienced convention expert as Heike Mahmoud. Both her expertise and the great appeal of the new CCH are sure to boost the popularity of Hamburg as a destination for conventions. I am very much looking forward to welcoming Heike Mahmoud to our team and working with her,” said Bernd Aufderheide (58), President and CEO, Hamburg Messe und Congress GmbH. 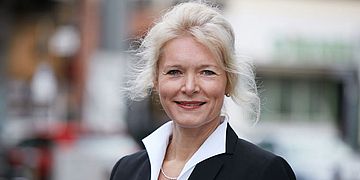